I cannot stand olives. I’ve managed to dodge them for most of my life, sticking them on my sister’s plate if I was ever served them; the smell alone keeping them far from my mouth. But we are in Greece, and there is no escaping the olive here. In Athens, we were taught how much olives are a massive part of Greek history and, driving from the port in Lesvos to our guesthouse, we passed olive farms that stretched as far as the eye could see. And that’s not even the end of it! In Italy we are literally going to be on an olive farm. They’re everywhere! And in Morocco too! You’d be surprised, but Morocco is the second biggest producers of olives and olive oil after, you guessed it: Greece. But I’ve tried; I took a bite of a black olive that had been sitting by it’s lonesome on the top of a heap of tzatziki – the Greek cherry on top I suppose – and I hated every second of it. I couldn’t escape this little thing and even if I can’t stomach the taste, I can’t deny the fact that the olive is special.

Olive farms on the island of Lesbos

It started around 6,000 years ago in Persia – before the written language was even invented. From being found in Egyptian tombs, to the reason Athens is called Athens, the history of this tree is unlike others.

When we were in Athens, we were taught the history of the city and the history of the name ‘Athens’. If you didn’t know, Athens was named after Athena, a Greek Goddess. It was a competition of sorts between her and Poseidon to see who the city would be named after. Now, there are two versions to this story, at least in terms of Poseidon. The first is that he struck the ground with his trident and up popped a spring of salty water. The people loved this, but upon closer inspection realised a spring of salt water was pretty useless. The second story is that he gave a horse to King Cecrops (the King of Athens at the time, as well as the competition’s judge), representing power in war and strength in battle. Athena on the other hand, who won as you probably guessed, gave the gift of the olive tree. The olive tree provided the people of Athens with olives for sustenance, oil for their lamps and for cooking, and wood for their houses. The olive tree represented peace and harmony, deeming this a perfect gift for the city and the King. Since then, olives have remained a huge part of Greek culture and history. When we walked up to the Acropolis, there was even an olive tree where Athena had supposedly planted the tree (it wasn’t the same one if you were wondering). There are fossilised olives trees that were found in volcanic rocks in Santorini that are 50,000-60,000 years old, and there are over 132 million olive trees in Greece alone. The more I researched and looked around me, the more I realised that this was not the place for an olive-hater (at least I like olive oil!). 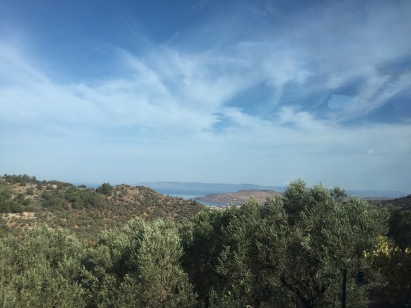 Much to my surprise, olive oil is seriously useful and, even in Indonesia where olives trees do not flourish, I was relying on it. As we carelessly and freely jumped off Britta’s pirate ship-like boat in the beautiful ocean in Lombok, I acquired both a blocked ear and a huge bruise and bump on my shin that I still feel the effects of. Because I hadn’t told Sarita or Johnny that I was in serious pain because of my blocked ear, I woke up with a massive earache and dark, dark bags under my eyes from no sleep. When I told Sarita the next morning, she immediately knew what to do: a drop of olive oil. This is probably pretty common knowledge, but I had no clue, so I was a little grossed out at the thought of having a really oily ear. But it worked! I mean, we did get ear drops and Q-Tips anyway (you never really know) but I was surprised, to say the least. As we continued our adventures to the ancient country of Greece, I found olive oil to be in just about every skincare product, every meal, and every little store we looked in.

One day, Kayla, Gab, and I went into this special little essential oil/all-the-natural-skincare-products-you-could-ever-want shop where we purchased clay face masks and essential oils. Because we spent quite a while in there being totally overwhelmed by choice and excitement and asking a ton of questions, the owner of the shop very generously let us take a bar of soap with us. He showed us to their soap section, and every bar was made with olive oil. At dinner every night, we were given a small basket of bread and along with that two small bottles of balsamic vinegar and, of course, olive oil. In Lesbos, we look out from the balcony of our guesthouse to see an olive pressing factory with a tall brick tower coming out of the top. In one of our science classes with Ibu Jackie, we are studying the olive tree, and we learned that olive oil works for inflammation, as a laxative, for your nail ridges, for wounds and skin diseases… the list goes on. In Jewish culture, olive oil is a symbol of riches, joy, and health. In the Bible, olive oil is mentioned as being used to anoint kings, as it was a sign that they were chosen by God to rule. The olive tree has acted as a symbol for peace since around 500 B.C. Olive branches were also used to signal the end of a conflict or the approval of a higher power. 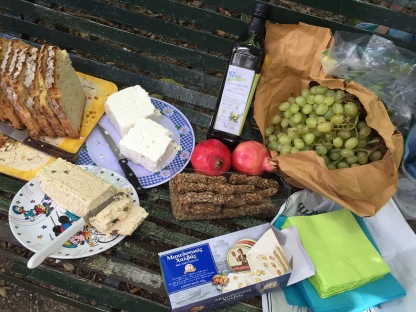 Feasting in Athens… with olive oil!

At this point I’m almost feeling guilty for not liking olives. I kind of want to like olives, but then I smell one and I just know it won’t happen. I think William, Gabrielle, and I are the only ones out of the whole Earthbound group that don’t like olives. I can’t even tell you the amount of times I’ve had to tell people that everyone has different taste buds, which is why I don’t like olives; yes I don’t like olives; and no, I’m not crazy. They’re one of those foods that everyone seems to have in their fridge all the time. I swear, we always have a jar in our fridge. Still curious as to what the hype about olives is, I set out to ask my fellow Earthbounders what they loved so much about this strange fruit. The answers were mostly about how sour, salty and yummy they are, some people mentioning the rich, earthy and royal taste. My favourite answer came from Will, I asked him to describe the taste in three words and he said: “it’s really gross,” – I could relate.

But still, I couldn’t fathom what this craze was all about. The only thing I had left to do was try a full olive. Who knew that writing a simple blog post on the olive tree would lead me to do something as crazy and adventurous as this – what a life! I proposed this idea to my current roomie, Kayla, to which she replied with a sarcastic comment about how groundbreaking and exciting this was (our love for sarcasm, tidy rooms, and early-ish bedtimes, I’m assuming, is why we are roommates). So we set out for the kitchen while everyone was searching around town for better internet, and since the vast majority of people living in this house like olives, I figured the search wouldn’t be hard and I wouldn’t have to pay for a full bag either. But as we reached the fridge, there was nothing. Nada. No olives. Our first mission was a bust. It was a little disappointing because I was hoping this was the very moment that my taste buds would deceive me and I would grow to be a fellow olive lover! A couple hours later, Johnny announced that he was going shopping for dinner supplies so I asked for some olives and, within the hour, I had an olive on my plate just waiting to be eaten.

It was the last thing on my plate because, despite its size, I was a little scared of this thing; it was practically sizing me up as it lay in the left over pasta sauce. The pungent smell, off-putting colour, there was nothing appetising about it to me. Alas, I had to eat this olive – this blog post depended on it. I popped it in my mouth and started chewing and within the first bite my face wrinkled in disgust. The vile taste was too overpowering for my mouth, but I was strong and kept chewing. But finally, enough was enough. I spat that wretched thing out of my mouth and threw it in the garden for the soil to enjoy. Luckily I was sitting at a table with Will and Gab, fellow olive loathers, so there was no judgment in my rejection of the devil fruit.

The olive tree is a special and wonderful thing; it wouldn’t be such a rich aspect of Greek history and culture if it wasn’t. And, while I won’t be able to enjoy the abundance of olives we will meet on our journey through Italy and Morocco, I can assure you that I will eat as much olive oil-soaked bread as humanly possible to make up for the olives I don’t eat. Sorry Athena, it was a nice gesture for Athens, but it won’t work for me. 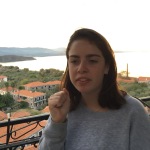 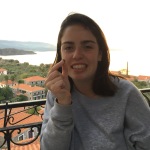 I couldn’t actually finish it… can you see the sadness in my eyes??

5 thoughts on “A Greek Standoff (of sorts)”