Hipponous, who later became known as Bellerophon, was a son of Poseidon, the god of the sea. He was raised by Eurynome, his mother, and Glaucus, her husband. They were the rulers of the kingdom of Corinth. Raised by them, Bellerophon was to one day become a legendary hero in ancient greek mythology.

In his early life, Hipponous made many unfortunate blunders, and the people felt as if he wasn’t a fit to become a king. He made a mistake where he accidentally threw a dagger at a person called Belleros and killed him, which gave Hipponous his new name: Bellerophon, which means the killer of Belleros. He was in trouble from accidental tragedies such as this one. Eventually , while training, Bellerophon accidentally killed his brother Deliades, which caused great pain for him and his family. That was the last straw. He was sent to Argos by the king Glaucus, where he could reconcile with the gods and amend his tragedies. One night on the way to Argos, Bellerophon camped outside a shrine of Athena. Athena, the goddess of wisdom, took pity on him for being sad about these mistakes that were so grave. Athena decided to give him a gift of a golden bridle which was to be used to bridle a pegasus. Alongside this, the goddess also gave him a piece of wisdom, warning him to not become overly confident because that can be a fatal flaw for most heroes. Bellerophon bridled up a pegasus that morning at a lake where it had stopped to drink and rode the magical creature to Argos. 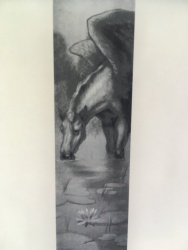 At Argos, the mighty king Proitos, who was a friend of Bellerophon’s parents, accepted their request of Bellerophon being reconciled. However, the king’s wife Anteia was aware that Bellerophon was a better-looking man than her husband, and she started to flirt with him. Bellerophon was wise and tried to stay away from Anteia because it was a bad idea to take the kings wife from him during reconciliation. After being rejected, the queen went to the king and gave false accusations of Bellerophon. The king didn’t want to kill him personally because he was a friend to Bellerophon’s family, so he sent him with an executioner’s note to another kingdom called Lycia, to the king Iobates who was the father of Anteia. Bellerophon left Argos to Lycia thinking that he was going to continue reconciliation but inside of the sealed letter sent with him was his own death order.

King Iobates didn’t want to kill Bellerophon by his own hands  because it didn’t look good to kill your guest from the view of the gods. So he decided to give Bellerophon three tasks which without a doubt would kill him. The King Iobates had a monster which was terrorizing his lands and killing his crops and eating his live stock. This was the monster Chimera it was part lion, part dragon, part snake, and part goat. It breathed fire and it was a problem because the guards can not deal with it, so sending Bellerophon was a way that might take out two problems in one sweep. Bellerophon accepted the challenge and when to go and fight the beast. After a while Bellerophon choked the beast to death by giving it a block of lead he’d dropped into the beasts mouth where its flame melted the lead and the monster choked on it till it died, and Bellerophon flew back victorious.

King Iobates was so shocked surprised and happy that Bellerophon was back and that the beast was killed, that he hosted a feast for Bellerophon. That night he had to think up of an other task that will kill Bellerophon. The next morning Bellerophon was given the task to fight the Solymoi which were a tribe that was invading the east of Lycia. He flew over and took them by surprise with his pegasus and killed half of their army before they knew it. The war chieftain asked him to stop and he made the deal of not to invade Lycia ever again. That night there was another victory feast Iobates was happy and frustrated that he still had to deal with Bellerophon somehow.

The next day the king realized that he had some attachments for this accidental hero and with great regret he asked him to go to the Amazons and stop them from causing war on his cites in Lycia. He flew to the Amazonian camp and laid waste to their armies, they weren’t happy to be defeated by one man but they admired his courage and agreed to leave the kingdom of Lycia alone. When Bellerophon came back to the throne room the king wept and made his confessions to Bellerophon. The hero forgave him and the king was so happy to here this that he let him take his other daughters hand in marriage and gave him the title Bellerophon the Blameless.

After  years of happy life Bellerophon was no longer a famous idol in the kingdom, with new and better heroes always coming around to help kingdoms. He wanted to be famous again so he decided to fly up and be the first ever mortal on Olympus . He would become a celebrated hero for eternity if he went to the Olympic hall and saw the gods. But Zeus saw him coming up on his pegasus and created the horsefly which bit the pegasus and bucked Bellerophon off and made him tumble to his death. He forgot the important piece of advice given to him from Athena: don’t be overconfident. Athena and Poseidon were very sad to lose another hero in the era of the gods.

Pictures from Percy Jackson And The Greek Heroes by John Rocco