Aphrodite is a woman who lives in Lesbos Greece, a beautiful island in the Aegean sea. She has a husband and three children, that she loves very much. She owns a hotel called Aphrodite’s hotel on the beach on Northern Lesbos, and she runs a school for people who want to learn English in the evenings. Aphrodite is a welcoming woman who makes everyone feel at home.

On April 27, 2015, a boat full of refugees arrived on the beach of Aphrodite’s hotel. There were kids, mothers, fathers, and disabled people on the boat. Of course, Aphrodite thought there was nothing else to do but help them. So they gave them food and extra clothes that they found in their closets. Once they were taken care of, they had to be taken to Mytilini (the largest town on the island, which has the port). So they called the coast guard and who told them to let them walk the whole 65km there. Now they knew it was illegal to give them a ride because you could be charged with smuggling, but they did anyways. Since then more boats arrived but only a few. But then soon after they started getting up to 8 boats a day! They knew they had to help but it was very difficult since the boats were landing on the hotel beach, which was full of guests. They had to take this into consideration, but thankfully almost all of the guests wanted to help.

In the end, they decided the was nothing else they could do but help. Along the way, they faced many difficulties. For example, the boat drivers were usually refugees themselves. We learned that many were put on the boats, and threatened to drive themselves, or their family would be harmed or even killed. In many other cases, the engine would not be big enough to pull the boat all the way to Greece, so they would have to paddle with makeshift paddles made of plastic bottles and sticks. Another danger was, as the refugees arrived, they would be so excited to be on land that they would jump straight out of the boat onto the slippery rocks. Many people hit their heads, some getting badly injured. They had one incident where a man fell underneath the boat while the propeller was still on. Luckily the boat moved and he was fine.

Every time a boat arrived it came with tons of garbage. All the old and wet clothes from the people on the boats, and even the boats themselves were left on the shores. The wooden boats took even longer to dispose of than the rubber ones, as they were difficult to remove. Old pieces of wood still remain on the beach until this day. The motors were also a problem because they are very hard to get rid of. Eventually, with some luck, they found people to take these as well.

Some people donated food and clothes for the refugees arriving on the boats, and many of Aphrodite’s friends came down to help. But surprisingly they didn’t get any help from the government. This was also very hard because they were paying for everything themselves.

Another crisis in the Greek community was that many people had to sell or give up their businesses because fewer tourists were coming to the island. Travel companies were telling foreign tourists things like: “We cannot guarantee your safety if you go to Lesbos.” Tourism in Lesbos has been reduced by 80% since the refugee crisis began! This is severely harming the income for the local people who depend on tourism and is a crisis in and of itself.

Now I sit here aware of this pressing issue and so glad to have met this amazing and strong woman. I would like to finish with a quote of hers:

“What I’m trying to tell you is that each face is not a number it’s a story, a history, a future, a life.” 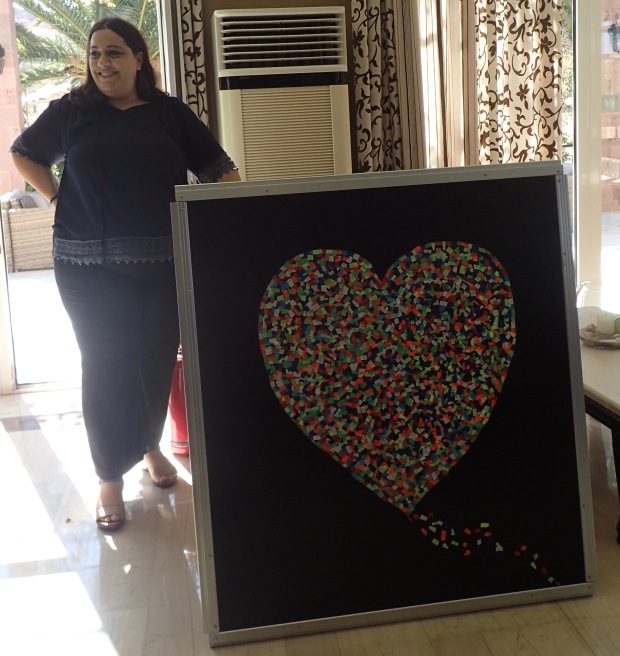 Aphrodite and a piece of art she made with her daughter. It’s made out of old life jackets from the refugees on a board from the bottom of the inflatable boat.