Before humans knew that the Earth was round, gravity existed, or that we were not the center of the universe, the rainforests of the world regulated global weather patterns and provided oxygen for us to breathe. They housed the most biodiverse ecosystems: unique places where life thrives in abundance – and they still do to this day. They are beautiful temples of life that literally hum with vitality.

And they are being cut down. 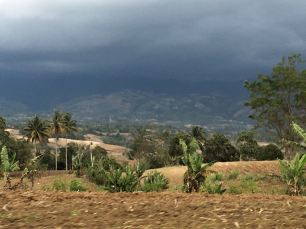 Clear cut plantations on the way to Ketambe

When I went to the Leuser Ecosystem I knew that rainforests were important for providing oxygen and combating our carbon footprint. But what I didn’t know, and what stuck me in a deep way, is that rainforests are the unsung heroes who regulate global weather patterns. Water is drawn up from the forest floor and then released into the air providing rainfall, which is dispersed around the world by trade winds. I saw this happening; I saw the mist collecting in clouds on the mountains above me, blowing off to supply the world with water. However, when the forests are cut down for conflict palm oil and other mono crops that system cannot function often resulting in droughts around the world that effect millions of people.The normal rain patterns which facilitated local agriculture get disrupted causing food shortages and price spikes. We can see this happening in real life. The drought in California, which affected not only Californians but everyone who buys products grown there. That drought is partly due to Amazonian deforestation and it is only getting worse.

Each year millions of acres of forest are cut down for wood, plantations, and infrastructure; and this problem always felt far away to me: a problem for governments in far away countries to deal with. But as I was walking through the jungle I fell in love with the way the jungle hums with activity; and later as we drove away to the airport through palm oil plantations, I realized something: it’s a problem for all of us. Every single person on the planet needs the rainforest to regulate climate. Whether you live in Sumatra, California, Russia, we all rely on these vast systems to distribute resources around the world

Each of us needs to help the rainforests because, without us, she is going to slowly whither and die, taking with her the systems for water transport that we need. Agricultural systems, local weather system, global weather and water systems; they all rely on the rainforest for regulation and support. And so do we. Humans need these systems to work if we are going to sustain such a large population – and solutions to the deforestation crisis are everywhere. Simply by avoiding products that directly harm the rainforests we send a message that we care about our planet. The products will change with your buying habits. You have the power create change simply by buying a different brand of soap, toothpaste, or peanut butter. What do you have to lose?

One thought on “Saving Systems”