We walked into this one a little blind, like a lot of things we’ve done on Earth Bound so far really. The only clue we had to what was about to unveil was that Sarita was giddy with excitement, but once again – a pretty regular thing. We were told it was called Saman Dance, and I’m not going to lie I thought everyone was talking about the fish, salmon (they sound very similar) so my initial thoughts were way off.

I was sitting right at the front, smack bang in the middle and I got a little fright when they started. From the very first movement the power and the strength of the actions sent goosebumps right through your body; from start to finish I was hooked, I wanted to know more, I wanted to see more! I could understand why Sarita was talking about it with such passion and anticipation to see it once more. As I talked to the individual dancers I learned that there was so much history around the dance and so many stories to be told. Then, through our own experience of watching and then learning  about the dance, this brought us closer to the guides and their culture. We could see how engaged these men were in their community and the power of Katembe. 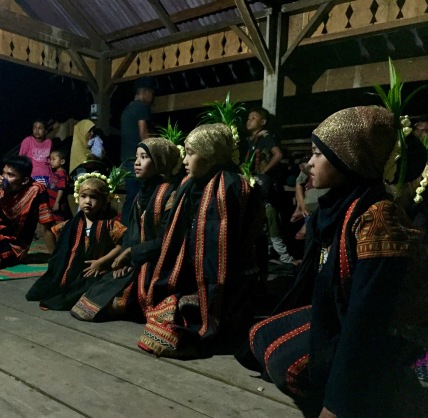 As we settled down in the local community centre, the air filled with excitement and anticipation for what was to come. Kids that we had played football with that morning were standing with their parents waiting for the show to begin. At first, a group of seven young girls, no older than 10, came out and performed the most beautiful and adorable dance while singing in incredible costumes. And I thought that was the Saman dance (like I said we went in blind) and while it was super cute and heartwarming, the actual Saman Dance was something else altogether.

The atmosphere in the room was a little off from the beginning, people seemed restless and a group of men were speaking quite loudly in the back of the room when the young girls were performing. I guess they had all seen it plenty of times, but I’m honestly surprised how the wow factor wears off. It started out with one of the men singing in one of the dialects from Aceh, with a powerful voice he sang as the rest of the group began to move. Sitting in a row, touching shoulder to shoulder on their knees, the men went from swaying and chanting altogether, to a single voice providing a soundtrack to fast paced, strong and swift hand movements.

The dance was extraordinary. The movement, the synchronisation, the precision, the pace – they were going fast, so, so fast!! It didn’t seem like there was an eye in the room not looking at this captivating performance. I had shivers from start to finish, reaching over to hold Kyla’s hand knowing she was feeling the same. The magic of the Saman dance followed us throughout the trip, as we returned to the community centre to learn the dance for ourselves. The men were so patient with us, and we were all laughing out of frustration because it most definitely did not come on our the first try. When we got into the jungle, we sat near the camp fire, all shoulder to shoulder, practising until our knees gave in and our brains were fried.

As we went trekking into the Leuser Ecosystem with some of the Saman dancers as our guides, I felt my intrigue increase. Sitting near the fire after dinner trying our best to learn a bit of the dance and speaking with some of the guides, I realized there was so much to know. First of all, it’s been around for a really, really long time, and while the exact origins were a little unclear, I understood that it began as a form of entertainment for Kings and Sultans in Aceh and was invented by Tempah Saman, a religious expert. It’s been carried on for generations, and our guide Iwan told me that both his grandfather and his father performed the dance, and one of the main reasons why a lot of these men continue to learn and dance it is to continue this tradition.

Putra was telling me that a long time ago when they didn’t have parties or gatherings like we do now, the Saman Dance was a way for young men and women to connect and interact in settings that weren’t as formal as weddings or other ceremonies. And even to this day, it’s a way for the community to get together; we saw young boys and girls watching in awe of these men giving their all to this beautiful and powerful dance. Despite it being quite an old dance and tradition, the Saman is something that has changed and adapted to the times, for example the original language that the songs were sung in has changed, Rudy told me that you can’t understand what they were singing many years ago because it’s so different, not to mention the influence on the costumes and movements that come from the various regions in Aceh. There is so much culture and tradition going into these dances, and it really is a special thing for the community; they even sing sometimes about how the local government supports the dance!

Each of the guides had been dancing for different amounts of times, but they all had similar reasons as to why they started and how they felt about the dance. Karin, from the Gayu tribe, said that the Gayunese people are very proud of the Saman Dance, he said when they see other Gayu people performing they all want to join in. Iwan was saying how when he first started out he wasn’t too serious and gave up after about a month, but then he saw his friends dancing, and they were really good, and in a bit of jealousy he started again and has been apart of Saman group since 2008. 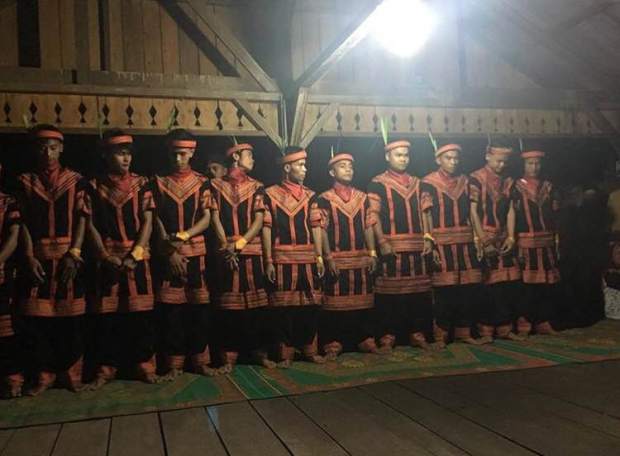 What really struck me about the whole experience, besides the insane skills these men possess and the dance itself was how these men were viewed in their community. People seemed to absolutely LOVE the performance; they love showing it to people who visit; these men love to perform; and they are also seen as heroes to the young kids watching. These regular guys are taking their time (by the sounds of it, quite a bit of time) to get together, practise and perform. They are carrying on a tradition from their fathers and grandfathers, carrying on the traditions from their people and it’s inspiring! Before we left to go rafting one day while we staying in Ketambe, we were sitting around looking in amazement and fascination of this little boy, not even two years old, listening to the Saman music on his father’s phone and doing the dance! Of course it wasn’t the exact same, what can you expect from this tiny human, but the thing was that he was watching these guys practise and perform and he listened to the music and he knew more or less how to dance the Saman dance! This experience made me think of how powerful your actions can be on the younger people around you. It made me think about how myself and the other seniors on Earth Bound can have an impact on the younger Earth Bounders, even if we aren’t doing something super cool like the Saman Dance or leading jungle treks. These guys could be making a really bad example for these younger kids, but these children are looking up to these guys and thinking, wow I want to be doing the Saman dance when I’m older, I want to be apart of ecotourism in Ketambe. It’s was truly a remarkable thing to witness.

While I am not a professional Saman dancer, nor am I an expert on the subject, it’s something that I won’t forget and I forget and I feel myself becoming attached to this dance. From our little glimpse into the world of the Saman dance as well as the Saman dancers, the richness in the history and the impact these men have on their communities and the way they have become role models for the younger generation and will continue the tradition of the Saman dance is something so powerful to see. As we carry on with our travels and meet more and more local heroes, we can see and learn how to be positive role models in our communities and with the Earth Bound team as a whole, even by doing something as simple as preserving tradition in the form of dance.